Nice one eXtreme, added to incomplete or unconfirmed section. Also added Scorpio - Progress and Suv - Roll Away there.

I also added a section to list tunes that have had different titles.

cool, DJ Die - Slide Away was known as' Off Centre' while on dubplate.

cool, DJ Die - Slide Away was known as' Off Centre' while on dubplate.

JJ, I was checking out Atmosphere Magazine scans on your blog and I noticed in Issue 17 - October 1994 is a Lucky Spin chart which lists the following: 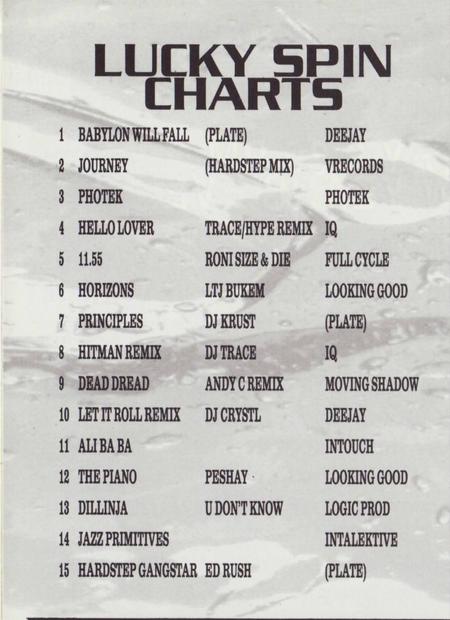 Maybe another name for Jazz Note or Burning? Or a separate tune entirely, who knows.

Actually, I wonder if that was meant to say 'Basic Principles' by Alex Reece, which was out on Metalheadz around that time if I'm not wrong (September / October)? Wouldn't explain the 'Dubplate' listing though, but then we can see these lists weren't exactly the most accurate

Slightly unrelated perhaps, but I also noticed a little detail in the Full Cycle interview in the same Issue; when asked about upcoming music, Die mentions a track that is a work in progress, called 'Hydroponics', which as we all know came out on Full Cycle a whole year later.

JJ, I was checking out Atmosphere Magazine scans on your blog and I noticed in Issue 17 - October 1994 is a Lucky Spin chart which lists the following:

Maybe another name for Jazz Note or Burning? Or a separate tune entirely, who knows.

It's probably Trace who compiled the tracklist for Lucky Spin, which means it's unlikely to be Jazz Note as Trace was playing it on dubplate in March / April 1994. This Krust tune doesn't have a confirmed title and was played out around the time the chart was compiled:

Or, as you say, it could just be an error

Looking through this thread, I think there's a track not mentioned.

Discussion in a few different threads:

The list is getting a bit long lol, but it's currently listed as Roni Size, Krust & Die ? - Unknown Title | SoundCloud | RollDaBeats

I'll do an update tomorrow. Thanks for the extra info

I’ve had an mp3 of this for a couple of years now,  but look what I just spotted tucked away!
Enjoy!!!!

Yeah, it’s also been known as Master blaster for years too

Yes spotted that yesterday too

Top release, wanted that ever since I heard it on One in the Jungle

Hopefully some others will be coming too

Is there a longer / unreleased mix of Krusts Cold War?

“Another track that I look back on and wonder why Full Cycle never released it. I guess at that time they were shitting stuff like this out daily. This one kinda reminds me of Clear Skyz and it sounds like he probably made it at the same time or just after. Maybe he was trying to get that Clear Skyz vibe again but funkier and more musical? I don’t know. But I do know that Die don’t play around when he’s rollin’ it and the groove on this is bad.”

Is there a longer / unreleased mix of Krusts Cold War?

'Cold War' (originally titled 'Cold World' on dubplates) was released by Talkin' Loud as the B Side to 'True Stories'. The released version clocks in at around 8 mins, there is a longer ten minute version that was on the Talkin' Loud promo only, I assume this is the version you mean. I think the reason for the edit is due to the stupid 20 minute rule that existed for singles at the time- a single could not exceed that length if the label wanted it to be eligible for the singles charts. Talkin' Loud obviously thought this was a potential crossover chart hit for Krust and so edited 'Cold War' down to get it below 20 mins with the combined 11 minute long 'True Stories'.

Interestingly Krust has never had a top 40 hit under his own name but a number of releases, some 12" only, have broken the top 75 and are therefore deemed to have been 'hits'. 'Cold War' which was released on CD single as well as vinyl, peaked at number 77.

Bryan Gee plays some old unreleased Krust tunes in this months V Recordings podcast, starts off at the one hour mark

Back to Unreleased Tunes